The role of women in water diplomacy related decision-making has been underestimated, despite the acknowledged essential role of women in peacebuilding, conflict management and sustaining security, as reaffirmed by the landmark United Nations Security Council Resolution 1325 on Women, Peace and Security (adopted on 31 October 2000) and by the eight resolutions on the issue adopted thereafter.

The untapped potential of brilliant girls and women is a great loss, both for women themselves and for the society as a whole. Women empowerment starts with access to safe water and gender responsive sanitation so that they are in a position to act as experts, partners, agents and leaders of change, including on water cooperation given the strong linkages among water, security and peace and the potential of water as an instrument for peace1. Further emphasis on encouraging and capacitating women to take up such positions has strong merits that are yet to be explored. Without deliberate action to address imbalances in the involvement of women and men within transboundary water management institutions and systems, there is a missed opportunity to reap the benefits of an inclusive water governance for more equitable, as well as technically sound, sharing of water resources for all stakeholders.

Issues of women’s participation and gender equality in the governance of shared waters have received insufficient attention to date, yet action is happening on the ground. Aiming to contribute to this direction, the Global Water Partnership – Mediterranean (GWP-Med) and the Geneva Water Hub joined forces at the beginning of 2020 and initiated a collaboration on the role of Women in Water Diplomacy with emphasis on the Middle East and North Africa region. The collaboration has taken the form of technical/ mapping work on the current status and challenges facing women in water diplomacy/ transboundary water cooperation settings, capitalising on the methodology used for a similar mapping exercise undertaken in 2018 in Jordan, Lebanon and Palestine. The current effort has reviewed and updated the work in the three countries and expanded the mapping to the Maghreb sub-region by including the cases of Egypt and Morocco.

The Comparative Study on Empowering Women in Water Diplomacy in the Middle East and North Africa (MENA) Region has been elaborated with the aim to identify the similarities and the differences in the challenges female water experts face across the five countries (Egypt, Jordan, Lebanon, Morocco, Palestine), and to identify the capacity building needs in terms of the various skills of a 21st century water diplomat.

The Comparative Study was financially supported by the Swedish International Development Cooperation Agency (Sida) in the framework of the “Making Water Cooperation happen in the Mediterranean” Project, aka Water Matchmaker Project, the Swiss Agency for Development and Cooperation (SDC) and the University of Geneva.

Through targeted outreach and dissemination activities, the analytical work has evolved into an Initiative aiming to support and strengthen the role of women involved in water diplomacy in the MENA region. The Initiative is led by the 6 co-authors of the Comparative Study, with the institutional co-ordination and support of GWP-Med and the Geneva Water Hub.

The Study is available below. 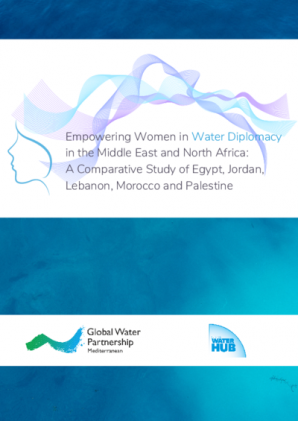