The Global Observatory for Water and Peace

Brief about the Global Observatory for Water and Peace

The world is facing the drama of water. Some two billion people do not have access to safe drinking water. In addition, 40% of the world's population lives in basins where rivers and aquifers are shared by different countries and represent areas of potential conflict. In contemporary armed conflicts, resources and hydraulic installations are increasingly under attack and used as weapons of war. In addition, water scarcity is exacerbated in a world where an increasing population is facing climate change as a result of human activity. By the middle of the century, nearly four billion people (about 40% of the world's population) will live in basins that are under water stress. This number will probably have to be revised upwards as the effects of climate change become more pronounced, leading to lower yields, droughts, floods and other extreme weather events. These effects will be felt around the world, but their greater impact on food security and the displacement of vulnerable populations will affect developing countries first. Migration and the resultant uncontrolled urbanization will exacerbate the pressure on already limited water resources.

In the face of these problems, humanity will have to find a way to halve its food production in the next 25 years and double its energy production by mid-century. Its activities will require considerable water resources to satisfy not only the needs of the ever-growing population, but also to maintain favorable environmental conditions for the functioning of ecosystems. The scarcity of water increases the competition between the needs of various water uses, including human consumption, industry, energy production and the environment. This inevitably leads to tensions between users, even between different sectors, between different users of a watershed or between various states.

Water is at the center of the link between energy, health, agriculture and biodiversity. The crises the planet faces overlap and intersect, and we can not afford to solve them one by one in isolation. But by focusing on what connects them - water and its Sustainable Development Goal # 6 - we can make progress in other areas. Conversely, ignoring the role of the link played by water will make it impossible to achieve the other Sustainable Development Goals.

Achieving water security therefore requires interdisciplinary collaboration between different sectors, communities and countries. International cooperation is therefore of vital importance. This observation is all the more striking because it has been shown that two states actively collaborating in the management of a shared water resource do not go to war for any reason whatsoever. As a result, it is crucial to recognize the importance and political nature of a large number of water-related issues that need to be dealt with diplomatically, thus requiring attention that goes beyond technical cooperation in the field of water.

One of the key areas of our common future is water, thus international water cooperation is an imperative. However, the actual level of international water cooperation leaves much to be desired. In addition, water problems are becoming ever more central in the armed conflicts of our era, a tendency that serves as a dramatic reminder of the fundamental nexus between water, security and peace.

These considerations have led a group of fifteen UN Member States to initiate the creation of the Global High-Level Panel on Water and Peace. The Panel was launched at a ministerial meeting in Geneva on 16 November 2015. The Panel's work was supported by the Geneva Water Hub, a Swiss organization that provided the secretariat support.

The Panel's report was the product of reflections of eight expert roundtables on cutting-edge topics as well as consultations with hundreds of policy makers and experts from around the world. Following four working meetings held on various continents, the Panel presented its final report at the end of 2017 in Geneva, New York and at global and regional events.

The Panel concluded that the global water challenge is not only about the development sector and human rights, but also about peace and security. Therefore, there is an urgent need to pay special attention to the link between water, peace and security and to address it in an integrated and comprehensive way at all levels, and nddeds a response in terms of new thinking, new practices and new institutions in diplomacy, international law, data management, finance, security management, technology, migration, climate change, pollution control among other spheres.

The Panel presented a set of concrete recommendations for action along these lines, which now need to be implemented with the support of States and organizations willing to commit to the agenda for the future of water, peace and security. One of these recommendations called for the creation of a Global Observatory for Water and Peace.

The rational behind the Global Observatory for Water and Peace

The role of the GOWP, as a global platform, is to facilitate assistance to interested stakeholders in using water as an instrument of cooperation, in avoiding tension and conflicts, and to promote peace. The GOWP adopts the knowledge management approach, and discreet facilitation rather than the traditional dispute settlement, peacemaking or peace building approaches.

The role of the Global Observatory for Water and Peace

The GOWP as a global platform will have strong analytic capacities in terms of water, peace and security. The Observatory’s purpose would be to catalyze and facilitate the expansion of water cooperation for peace, focusing on hydro-diplomacy beyond joint management, and in cooperation with its implementing partners, by:

“Open Science, leaving no one behind” and the Global Observatory on Water and Peace

10 November marked the World Science Day for Peace and Development. The 2019 theme is “Open science, leaving no one behind”.

Open science is traditional science conducted in a more transparent and collaborative way, and is meant to provide equal opportunities to all in terms of access to science, knowledge and data.

This year’s theme on open science does not only resonate with the academics, but to all that contribute to sustainable development, assist in alleviating the fragility and building resilience of our modern world.

In recent years, there has been an increasing global recognition of the potential of water cooperation as a vehicle for peace. There is also an increased appreciation for the potential of a water-peace nexus; a peace that is not defined by the lack of armed conflict, but by the prevalence of sustainable development.

Two years ago, the Global High Level Panel on Water and Peace, launched its report “A Matter of Survival”, that included a set of recommendations aimed at strengthening the global framework to prevent and resolve water-related conflicts, to facilitate the use of water as an important factor in peace building and to enhance the relevance of water issues in national and global policy making.

Among those recommendations, was the establishment of the Global Observatory for Water and Peace, an inclusive network that improves the limited capacity of international actors to act collectively and effectively at the political and diplomatic levels to fill the critical gaps of the global water architecture in its ability to contribute to meeting the 2030 Agenda and “leaving no one behind”.

The Global Observatory for Water and Peace is an example of an open science platform that provides knowledge and shares expertise to all, on the potential and role of hydrodiplomacy for the purposes of peace and development. It is an innovative and fine-tuned approach to existing practices and is meant to create an open network of expertise (individual and institutional). The analytic capacity of the Global Observatory on Water and Peace and its regional partners is strengthened by data supported and science based evidence, through research and open science.

In addition, the Global Observatory for Water and Peace is meant to promote “People’s Diplomacy” that includes actors at local, as well as national and regional levels. “No one behind” not only is meant to an open science that includes also the marginalized, and fragile, but extends to another fundamental human right- human right to water and sanitation. The Global Observatory for Water and Peace aims to leave no one behind in the process of using water as a vehicle for peace.

The preliminary brochure is available below 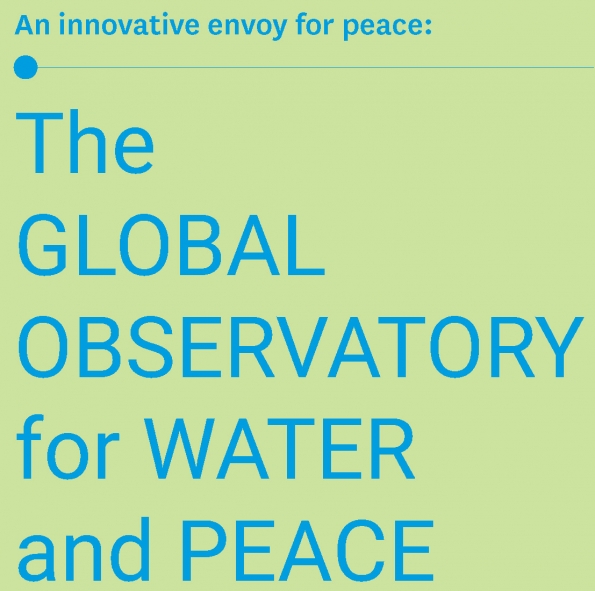