Policy Brief n°3 - The Reconfiguration of Water Policies in Central Asia: A Reflexion on the IWRM Implementation in Uzbekistan and Kazakhstan

Introduction: A Reflexion on Water and Its Policies

Until the 1970s water resources management was considered a technical issue mostly under the control of statecentralized bureaucracies and their hydro technicians and engineers, but since the end of the 1980s, significant changes have occurred. Reflecting on different issues ranging from climate change and population growth, to land degradation and inequitable water access, it emerged that the management of water resources is not merely a technical matter, but a socio-political, economic, and environmental process which involves a wide spectrum of different actors in the society. Since the 2000s, different scholars - geographers, political ecologists, sociologists and political scientists - have started arguing the political nature of water resources management; Allan (2003), Mollinga (2007), Molle (2008) and others clearly  state that the majority of water security issues and inequalities to water access has a relevant political nature. In the current context of globalization and related socio-political and economic reconfigurations, since mid-1990s several international agencies have started to promote, in particular in the developing countries, initiatives and programs to improve water resources management according to an environmental and social sustainable development. However, this approach and related logics, have tended to depoliticize different social and environmental processes related to water management.

Reflecting on these processes and connected challenges, this contribution aims to analyze and understand the logics of water policies implementation, specifically the Integrated Water Resources Management (IWRM) framework in Central Asia — an heterogeneous arid and semi-arid region which lie in the Aral Sea basin. These processes are analysed in Uzbekistan and Kazakhstan focusing at the basin / local level according to a comparative approach; hence, the following questions arise: what are the logics which have affected the IWRM implementation? Were the national sociopolitical systems able to shape this process according to their strategies and aims? National policies to the IWRM, or processes which hampered its implementation have emerged? In the framework of Political Geography, this research is essential in understanding the logics and rationale of institutional water reforms implementation, and related socio-political reconfigurations, in a region where water resources play a significant role in the development of the two states’ political and economic spheres.

Read the rest in the following document. Click on image to open PDF (1.6 MB): 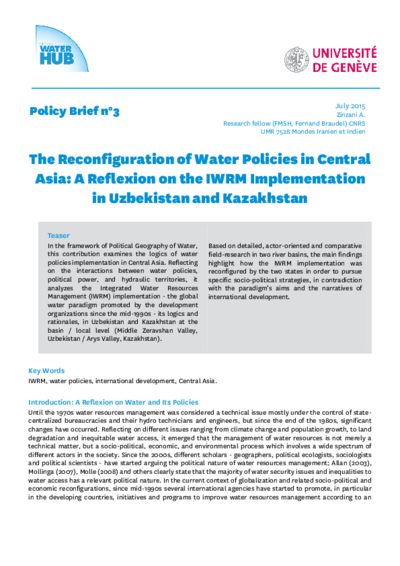